Broadly, Russia is miraculous country. Here in front of background of increasing cost of life and it’s quality deterioration some deputies and office-holders allow themselves obviously cynical and boorish remarks. Expressed in public, by the way. I’ll give two cases as examples.

21’st of January 2015 parliamentarian from Sverdlovsk Ilia Haffner, who used to belong to political party “Edinaya Rossiya” up to the case I write about below, told that Russians “must think about their health, for example, they should eat less”. 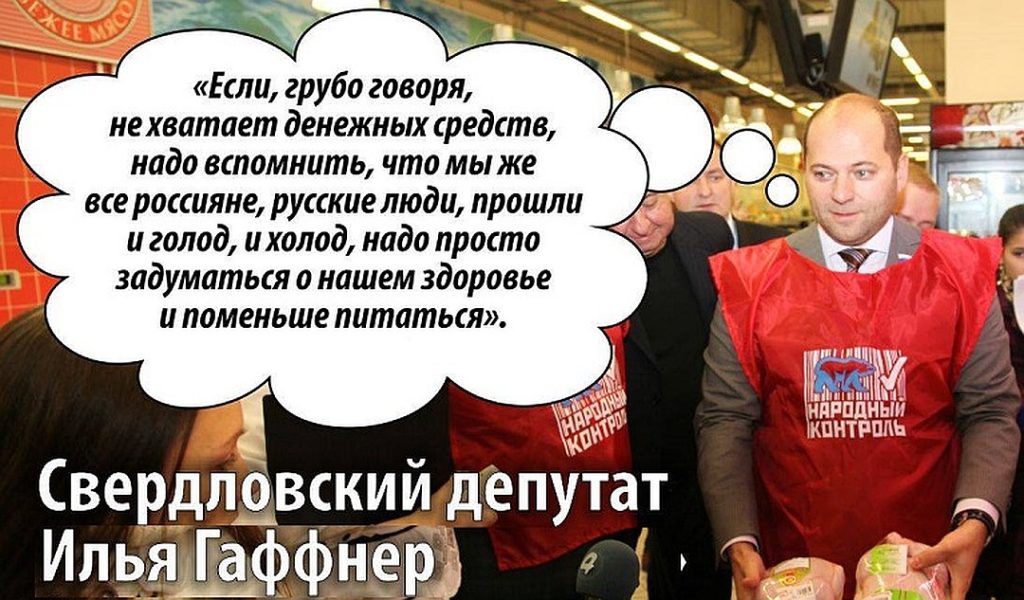 “On the average prices got up by 25 per cents comparing to last January. I think that’s OK. If you don’t have enough money you have to remember that all of us, the Russians, are Russian people. All of us came through hunger and cold – what we only haven’t passed. You just have to think about your own health and, for example, eat less”, — uttered Ilia Haffner during his raid on one of Ekaterinburg shopping centres.

Then nation’s favourite son has added: “New Year is over, people had enjoyed their fill and it is needed for them to start doing sports”. Speaker’s vocabulary is saved.

The raid was held as part of the “Narodniy kontrol’ project which aim was to track quality and prices of alimentary goods. Common Uralians used to complain to authorities about the lack of money for essentials.

10’th of October 2018 Saratov office-holder Natalya Sokolova has declared that 3500 rubles (53 US dollars and 39 cents at the rate of the Central Bank of Russia from October 24, 2018) should be enough for pension holders to buy themselves food. Her opponent, Nikolai Bondarenko, the deputy of Saratov regional Duma, offered her to try to live on these money. Natalia Sokolova answered the following: “I am a man of decision but the status of the Minister doesn’t allow me to do this”.

All of this took place in local legislative assembly during the discussion of the minimum living wage for non-working pension holders in future 2019 year. Sokolova offered to increase in only by 288 rubles (4 US dollars and 39 cents).

I would like to mark the fact that 2018 (as some previous years) was characterized by the apparent increase of cost of many food products. Salaries and pensions are still leave much to be desired.