Here you will learn about what the armed forces of the Russian Federation are. I hope this information will be interesting and useful for you.

The Armed Forces of the Russian Federation currently have about 900,000 troops and 2,000,000 soldiers and reserve officers.

Russian military budget is about 5% of the gross national product.

Below you can see what the emblem of the Armed Forces of the Russian Federation looks like: 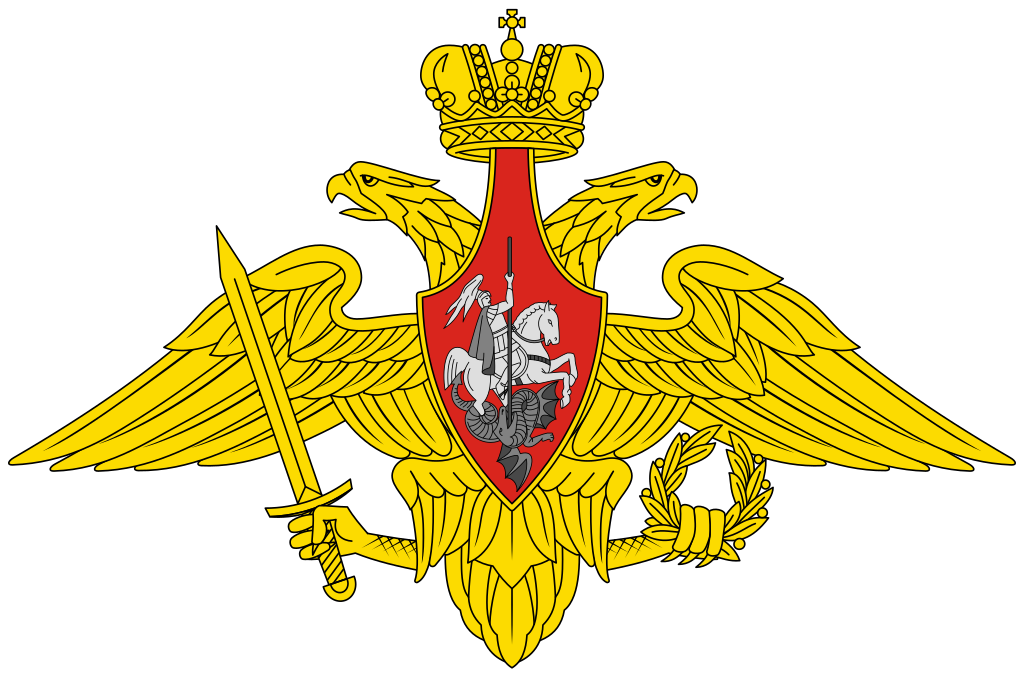 In Russia, there is an alternative civilian service, but in fact — the rights of citizens to work in the interests of society and the state in return for military service are constantly violated. It is almost impossible to achieve the appointment of ACS in Russia instead of military service.

In the Russian army there is gender discrimination. Many positions are unavailable for women and there are significant difficulties to gain promotion.

You may be interested in:
Russian nuclear weapons;
Modern Russian tanks.

There are three branches of the Armed Forces in Russia which are divided by areas of action:

Military service in the Russian army

Salaries in the Russian army

Many people are interested in how much contract soldiers earn. Russian contract soldier without or with small length of sevice earns as much as postman and telecom operators of the Russian Post. And it is an open secret that salaries of Russian postal workers are so meagre. With this fact in mind, telecom operators and postmen are not sent to die in Syria or in Ukraine, while soldiers are at imminent risk of sending away to fight or to die, no one forces postal workers to build cottages for their superiors, threatening them with battery in case of disobedience. Moreover, it should be emphasized that they do not become armless and legless because of work. Many operators and postmen have several rates and work close to home.

So, it should not be surprising that Russian contract soldiers are considered to be typical and incapable losers. Besides, certain people who know what customs prevail in the Russian army consider the Russian military personnel ordinary low-life scum. After all, the modern Russian army is not much different from prisons and settlements for criminals in many aspects, in many ways morals are similar. And it is quite obvious because of hazing traditions. Would you agree to be in a cell with thieves for 17 thousand rubles (about $250 USD) paid to you as the official salary from the state? Or would you be ready to go to the army for a salary of 17 thousand rubles per month?

You may be interested in:
Disabled people of military service, how do they live in Russia?

Hazing in the Russian army 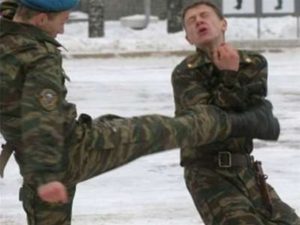 Hazing (Dedovshchina) is an informal hierarchical system of relationships among lower-level military personnel which has developed in the Russian Armed Forces on the basis of discrimination, psychological and physical violence and committing criminal offenses under the guise of their “normality” and “naturalness”. It is a kind of non-regulation relations.

Hazing is criminal in nature and usually manifests itself as an abuze, physical and psychological violence, commiting various criminal offenses.

Non-regulation relations of this kind exist in all types of troops of the Russian Federation.

Hazing in the modern Russian army is the main cause of murder, suicide and desertion. Now it is all about hundreds of officially registered cases of annual suicides. The real number of suicides in the Russian army and in the fleet is likely to be higher, because the military authorities try to hide such incidents by all available means. Many military units of the Russian army are more reminiscent of Stalin`s labor camps (named The Gulag). In such military units, the number of suicides is several dosens. This is not a secret. It has long been known in society and has been considered the norm in Russia. And all this is not surprising because the Russian state needs controlled and irresponsible slaves, but not free and independent citizens. It shows what the Armed Forces of the Russian Federation in particular and Russia as a whole are.

Below there are examples of the consequences of hazing in the Russian army.

On 17th February 2017 at 10 a.m. the coscript Arcady B. (who served in the fifth company of the military unit at number 3186 in the Moscow division named after Dzerzhinsky) opened the window and fell head first down from the third floor of one of the buildings of the military unit. He sustained numerous injuries but fortunately he did not die as a result. The soldier pointed out that senior soldiers threatened and intimidated the low-ranking soldiers and extorted money from them. Then one day, Arcady had been forced to sell his part of the flat. He could not do it, so he was brought to the jump from the window.

On 6th December 2006 from the military unit at number 01480 of the Pechenga town of the Murmansk region twenty-years-old contract soldier Alexander Belsky in a state of coma was brought to the hospital in Severomorsk. Co-workers cruelly kicked him, after which they had shot him in the head with a machine gun. Neurosurgeons had been fighting for his life for two months.

On 31st January 2007 sixteen-year-old cadet Nikita Sanitov committed suicide at the Chelyabinsk Red Banner Military Aviation Institute of Navigators. The Chelyabinsk military prosecutor`s office opened a criminal case on this incident under Article 110 “Incitement to Suicide” of the Criminal Code of the Russian Federation. 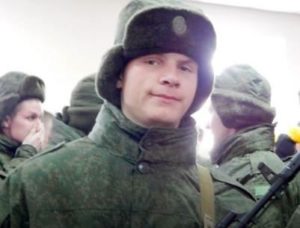 One summer afternoon (on 22 June 2015) a member of the military service of the military unit (number 71289 VDV, the Airbone Forces) Nikolai Kurasov hanged himself on the territory of the military unit. Nikolai did not shy away from conscription and voluntarily joined the army. He was pleased with the direction to the VDV (the Airbone Forces) and later wanted to continue service under the contract. However, in the company he faced bullying, money was extorted from him and he was beaten. His co-worker Ramil Bagautdinov had it out for Nikolai because of the refusal to obey and to be on duty instead of Bagautdinov and clean his shoes.

Private Bagautdinov served in the Airbone Forces in the military unit of Ussuriysk. Co-workers were afraid of Ramil and tried not to contradict him. According to the materials of the criminal case, in January 2015, private Bagautdinov decided to brag to his friends and and forced seven colleagues to line their faces to the wall without shirts. On their backs, he wanted to write with shaving foam the word “Tatarin” (means the tatar nationality).

“If you, Russian beast, don`t get up, I will destroy you right here.” These are words that, according to the materials of the criminal case, Bagautdinov demanded from the military personnel of the military unit number 71289 of the Airbone troops to obey his will in order to capture them in the picture.

One of the soldiers refusedto act with the words: “My grandfather didn`t fight for humiliating me”. According to the materials of the criminal case, Bagautdinov persuaded his colleague in a peculiar way. He knocked the soldier down on the floor and several times kicked him in the temple, saying: “Your place is in this rank, Russian”.

The photo turned out to be quite popular on social networks.

A few days before the death, Kurasov fled from his company to Ussuriysk, but he was quickly found and returned to a military unit. That was the day his parents came to him. Kurasov told them that older soldiers in a company beat up young soldiers who enter the service. They are usually beaten over the mattress and around the neck so that there are no traces. Nikolai said that he wasn`t going to tolerate humiliation and i.e.wash clothes for demobilized men. Kurasov`s mother told that they promised to transfer her son to another company.

Three days after the meeting with his parents Nikolai Kurasov was found hanged. Relatives say other soldiers threw him seven thousand rubles and put him as an informer and a thief. His mother sure her son was killed and the suicide was rigged.

The trial led to Ramil Bagautdinov receiving two years in a colony for non-statutory relations and calls for incitement of hatred on a national basis. It is known that Bagautdinov openly said that he hates Russians.

Corruption in the Russian army

In the Russian army, not only the so-called hazing but also corruption is flourishing. In the Armed Forces of the Russian Federation many people steal many things. They steal from the soldiers rations, clothing and machine guns to the billions of dollars allocated by the state to the army. We need only recall for a moment the corruption scandal of 2012 in the Ministry of Defense of Russia.

What is the Russian army?

The modern Armed Forces of the Russian Federation are far from pleasant and safe place. In the Russian army soldiers not only die, but also come out of it by mental and physical cripples. And this happens in peacetime! Moreover, many of those who have passed the Russian army become capable of any abomination and crime. The Russian army is doing everything to destroy personal uniqueness and individuality, self-esteem and indipendent. In essence, a soldier has no rights and protection in the army.

Many persons talk about how strong the Russian army is. The question is how the soldiers, who are under humiliation and threat of beating, will fight. Remember how many soldiers from the Soviet army ran to the enemy during the Second World War.

If you want to know Russia and its population, look for information hidden from outside eyes about the peculiarities of the Russian army.