Do you know which Russian city is located on the islands of the Gulf of Finland? This is an amazing port-city of Kronstadt. If you decide to visit St. Petersburg with a tour, then you need to go to Kotlin Island and see all the sights of Kronstadt.

The history of Kronstadt

Earlier, by decision of the Stolbovo Peace, the Kotlin Island belonged to Sweden, but the ingenious plan of Peter I helped to return this strategically important point of the Russian Empire.

The main mistake of the Swedish ships was to return to their homeland, to the non-freezing ports, when the cold weather came to the island. At this moment, Emperor Peter I ordered to start building a secret fortress on the island to begin. In spring, the Swedish ships returned to the island, where the fortress and Russian cannons had already firmly settled. Thus, in 1704 year island, the adjacent islands and the fortress itself became the property of the Russian Empire. In May of this year, the fortress was christened and was named Kronslot. 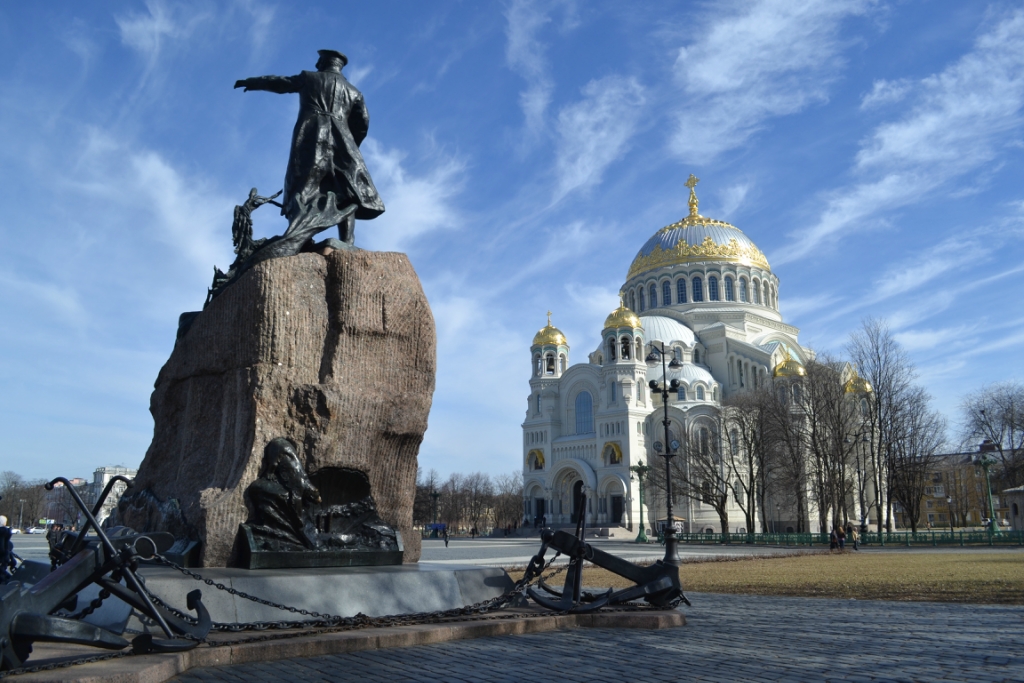 The Swedish kingdom sent its ships a lot of times and tried to return the island, but all the attacks were repelled. According to Peter’s I plan, fortifications were actively building up on the island and, in 1723, the fortress of Kronstadt was laid, after what the city began to bear that name, which translated meant “Crown City”.

Gradually, developing its defense potential, Kronstadt became an important port and center for the repair and construction of ships.

In 1921 year the soviet authorities brutally suppressed sailors’ and residents’ insurrection against dictatorship of the Bolsheviks.

In 1996, “closed” status was removed from the city of Kronstadt, so anyone can visit it. From St. Petersburg to Kronstadt people can go by car, trip will take less than hour. In addition, there are buses and taxis in Kronstadt, and when the weather is favorable, tourists can even go on excursions on launch. 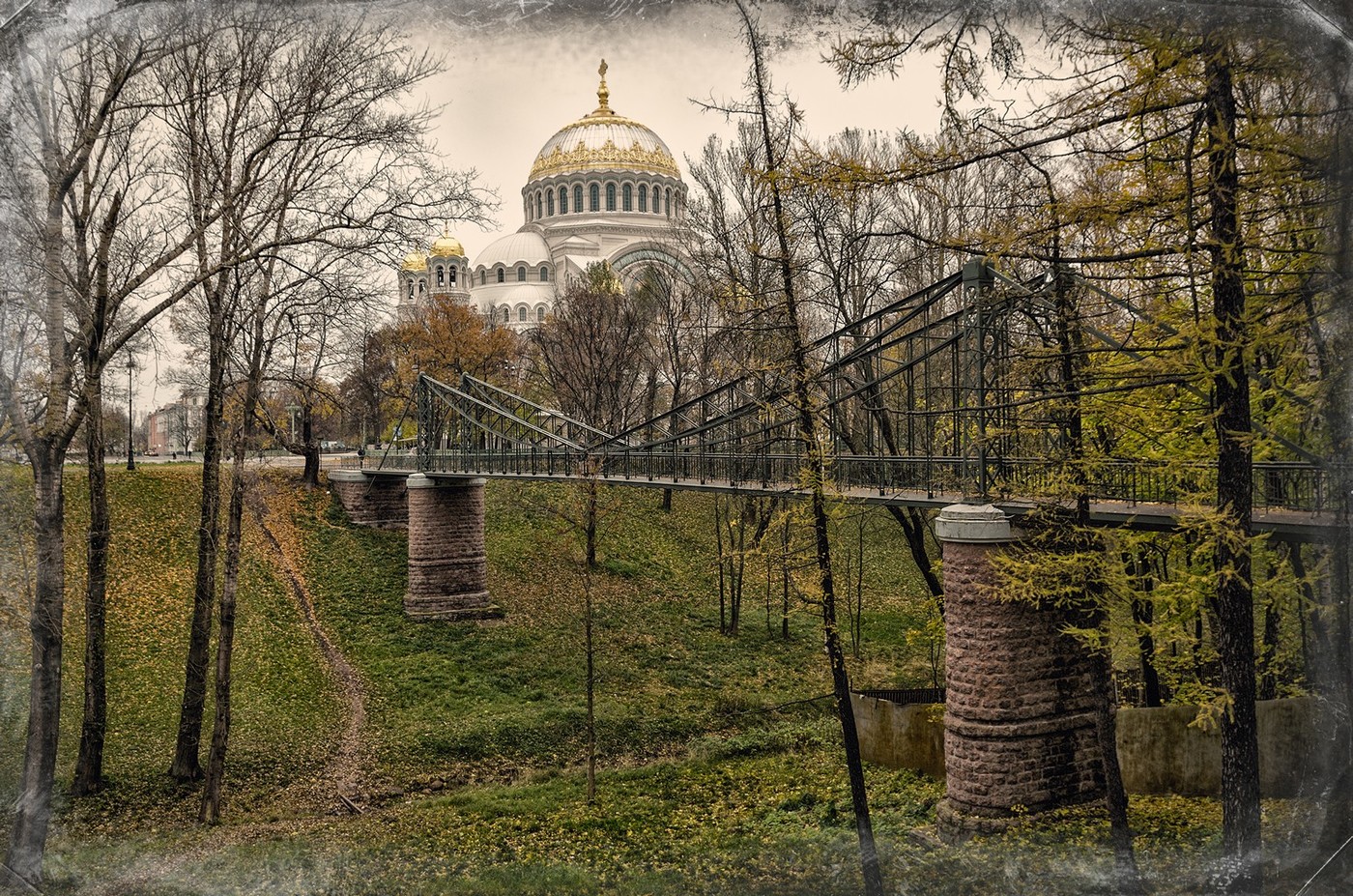 According to the 2018 census, about 44.5 thousand people live in Kronstadt, and most of the residents are employed in the city. Currently, one of the largest enterprises in the city is the marine factory, which repairs ships.

Climate and ecology of Kronstadt

The climate of Kronstadt is moderately cold, as is the climate of St. Petersburg, due to its location in the Gulf of Finland. The highest temperature in the city is observed in July, and usually August is a rainy month.

Ecology of Kronstadt compared to St. Petersburg, is much better, because clean air brings wind flows from the Baltic territories, and the problem of gas pollution is much lower in the city.

What places to visit in Kronstadt

If you decide to see the city on your own and refuse from the excursions, then the map of Kronstadt with streets and sights will become your indispensable assistant.

Arriving in Kronstadt, first of all go to St. Nicholai Naval Cathedral, which is considered to be one of the main attractions of the city. One look at the cathedral is breathtaking: the majestic facade is crowned with shining domes with ornate gilded ornaments. The Cathedral can be considered as a slightly modified copy of the Temple of Constantinople, St. Sophia. The luxury and mastery of interior amaze: the walls and domes are covered with a bright mosaic, depicting the faces of saints and the subjects of the life of St. Nicholai, whose name bears the cathedral.

Throughout history, this temple has experienced a lot: approximately 15 years after its foundation, it was closed and given away for the organization of cultural and educational activities. In February 1930, an anti-religious rally was organized, whose activists threw down the crosses and bells of the temple.

From this moment to the present days, the Nikolsky Cathedral was a cinema, observation deck, and even a concert hall. Restoration work began only in 2002, returning the temple to its original purpose.

At present, the Nikolskiy Naval Cathedral has the status of a stavropegial, what means it is independent of the local diocese, and is the main church of the Russian fleet.

Defensive forts are also the main sights of Kronstadt, so they need a special attention. The fort «Emperor Alexander I», also known as «Chumnoi» arouses interest too. The construction of the fort was necessary to strengthen the south side of Kronstadt, so the decree of Nicholai I in 1842 marked the beginning of construction, and it was completed by July 1845. Fortification was made a three-story, oval-shaped with a courtyard in the center. The prototype of the fort «Alexander I» was built by the famous french fort Boyard. The total area of the fortification was more than 5 thousand square meters, which made it possible to place there not only the most powerful equipment, but also about a thousand people of the military garrison. Throughout its history, the fort «Alexander I» several times came to combat readiness, but by 1896 had lost its defensive status. By the end of the XIX century fort was converted into a plague laboratory, because of another epidemic of plague that swept the world. So, it caused an appearance of elevators, a kind of crematorium and stables with horses, where research on the development of a plague vaccine has been done on animals. The laboratory stopped to work with the beginning of the First World War, but the name of fort, «Chumnoy», remained. Currently, the fort is used for shooting films and TV shows, for example, the famous TV series “Sea Devils” was filmed here, as well as for boat tours. 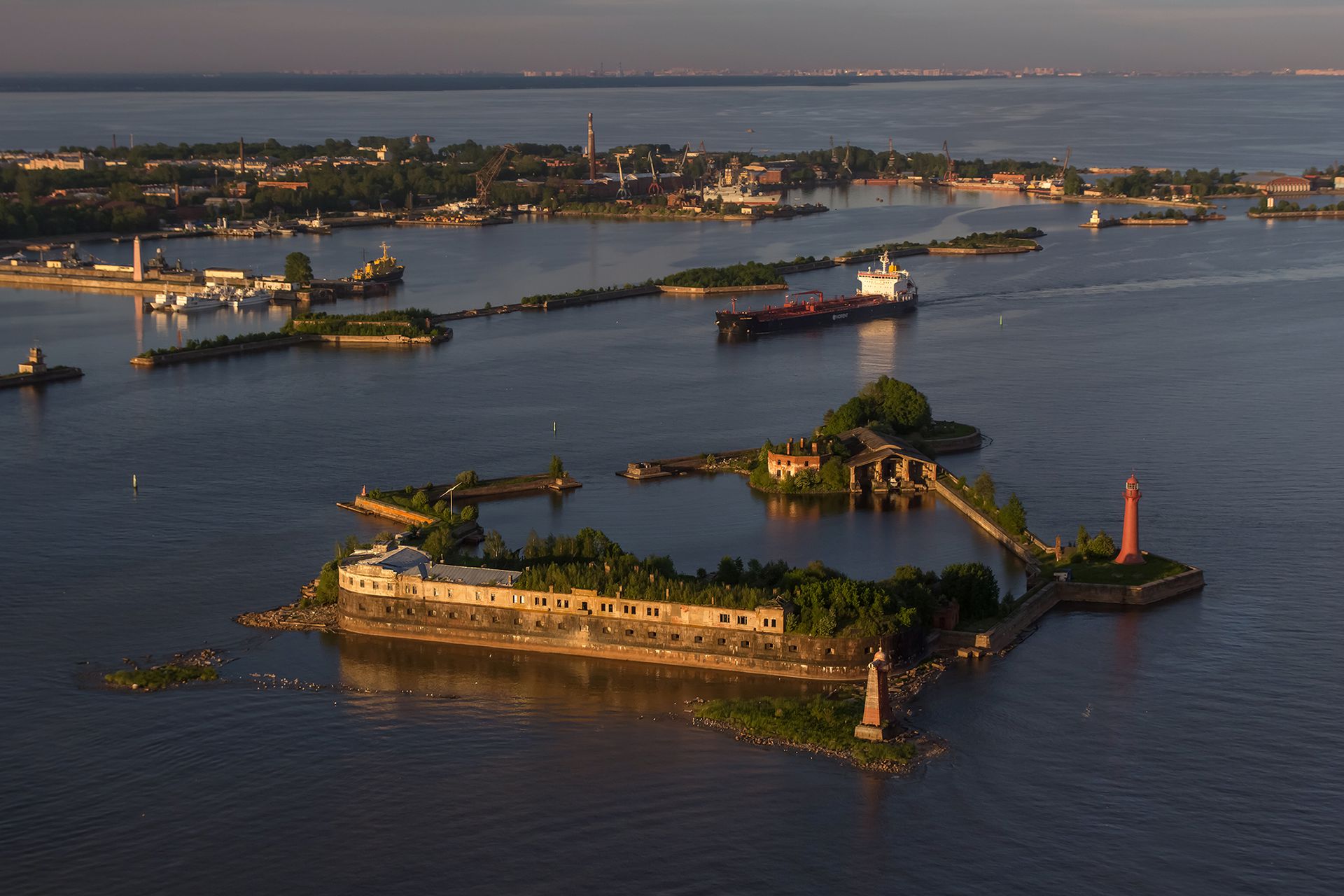 Another important landmark of the city is the Kronstadt Fortress, the Northern shaft, which has been preserved in good condition. The history of Kronstadt begins exactly with the laying of this fortress.

The founder of the fortress wall of Kronstadt was Peter I, but construction continued even after his death. During its history, the fortress experienced a serious flood, which almost destroyed the structure in 1824. The sudden riot of natural elements led to serious destruction, but by 1826 the fortress was restored almost in its original form.

Being in the city center necessarily walk along Yakornaya Square, the main feature of which is the cast-iron pavement. On the west side of the square is the building of the Kronstadt Admiralty, part of the buildings of which is preserved at the present time. From Yakornaya Square you can get to Red Street, go to the Makarovsky Bridge, which is also an architectural monument. Initially, the bridge has a metal frame and wooden flooring, however, after the next reconstruction in 1970, the bridge was made welded and an asphalt surface was laid on the metal flooring.

Tolbukhinsky lighthouse is also an interesting monument to Kronstadt, located to the west of Kotlin Island on an artificial rocky island. Currently, huge restoration works are underway, so the lighthouse is closed until August 2019. You can admire the lighthouse from a distance, best in the evening, when the sunset sun paints the waters of the Gulf of Finland and the walls of the lighthouse in orange-red tones.

Earlier, you could complete your tour by a quiet walk through the Summer Garden, but, unfortunately, until July 2019 it is closed for renovation. The central alley of the garden is a preserved part of the very first Kronstadt street, on which the house of Peter I was located. Inside the garden are the famous “Makarov Oak”, a monument to the clipper “Oprichnik”, a monument to midshipman Domashenko and a memorial granite slab to John P. Jones.

On Makarovskaya Street is located Petrovsky Park, where a monument to Peter Velikiy is installed. The main feature of the park is the Winter Pier adjoining it, from which all Russian sailors began their round-the-world voyages.

Kronstadt is a city with a rich and interesting history, represented by many interesting places, historical museums and architectural monuments, which are impossible to get acquainted with in one day.