In Russia, the law-abiding among the population still leaves much to be desired. This also applies to some “law enforcement officers”. They often have a sense of their own impunity and they begin to commit one crime after another. Many Russians are afraid of police more gangsters. Where this fear comes from? You can understand it from some extent from the incidents discussed below.

In addition, I can say that the essence is the difficulty of finding justice among the police officers who have violated the law and the danger they represent. Alas, in Russia things are often this way.

There are only some of the proven cases of murders of Russian residents by former police officers are considered in this article. In the meantime, I assume that the bulk of such killings still remain in the shadows. But there are also many other types of crimes, which are not discussed here, but which were committed and are being committed.

Evidence for each of the following cases is the convictions of the relevant Russian courts, which are open access.

Saratov, 2008, an officer of the criminal investigation department.

Three operatives of the criminal investigation department of the Leninsky Department of Internal Affairs of the city of Saratov: D. Korchagin, Y. Ogoltsov and D. Churikov burned alive in the forest a detainee on suspicion of stealing from the trade pavilion. Having taken the detainee to the police department, the policemen started beating him, demanding to confess to the crime. Then, using a company car, they took the detainee in handcuffs to the forest, where they continued beating him. The detainee fainted from beatings, after which the police poured gasoline over him and burned him. The next day, they again came to the forest and buried the corpse at the crime scene. The jury of the Saratov Regional Court found all three former police officers guilty of murder, and the court sentenced D.Korchagin, Y.Ogoltsov and D.Churikov to 23, 20 and 21 years in prison, respectively. The Supreme Court of the Russian Federation upheld this sentence without changing.

Moscow, 2009, the head of the district police department.

On the night of April 26-27, Major Denis Evsyukov, head of the Tsaritsyno district police station, shot from a pistolet to the driver who was brought him from the banquet and then opened fire near one of the capital’s supermarkets and inside the store. In total, that evening a drunken policeman shot two (the driver and the supermarket cashier) and injured seven people. The case of Major Yevsyukov received the wide public and political response. However, the purpose and motive of the shooting were not established.

Photo of the ATS in the Tsaritsyno district, where Denis Evsyukov worked: 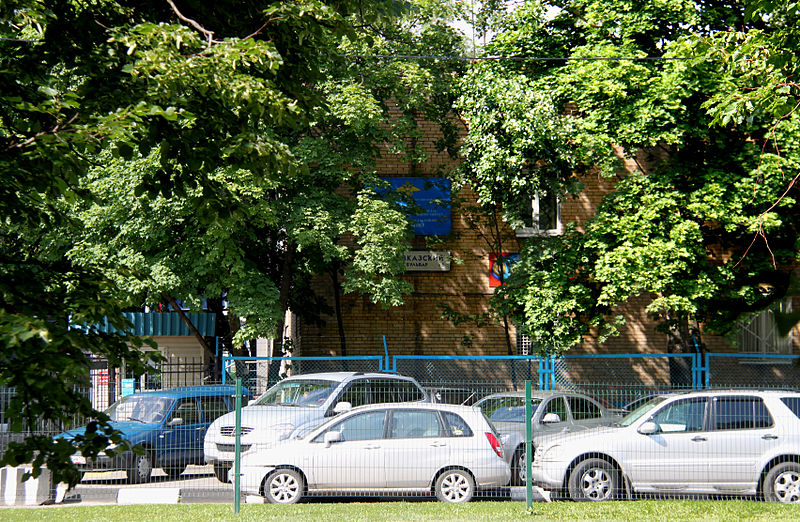 In February 2010, the Moscow City Court found the former head of the Department of Internal Affairs guilty of killing two and attempting to kill several more people and sentenced Denis Evsyukov to life imprisonment.

In the Baryshsky district of the Ulyanovsk region, a drunken 23-year-old local police inspector Igor Danilov strangled a 20-year-old girl, a local resident and a student. The materials of the criminal case indicate that earlier there was an intimate relationship between the killer and the victim. The policeman killed the girl in the cabin of his own car, struck to her several blows with a heavy object on the head, and then strangled her. The killer threw a corpse not far from the local school.

The Barysh city court sentenced the former police officer to nine and a half years in prison in a penal colony. The regional court, where Igor Danilov filed a cassation appeal, left the sentence unchanged.

According to the Investigation Committee, the head of the city criminal investigation department, Ruslan Rakhayev, beat the detainee in the office, after which he died from beatings.

Rakhaev himself did not admit guilt and claims that his subordinates delivered the detainee to the department of the criminal investigation already beaten and then testified against his leader. The case was investigated for about seven years, caused a wide public response and conflicting opinions of experts.

In June 2018, the Cherkessk District Court sentenced Ruslan Rakhayev to nine years ’imprisonment with serving time in a penal colony.

Volgograd, 2015, an officer of the Economic Security Department.

At about three o’clock in the morning, the 23-year-old economic security officer of the Volgograd Department of the Ministry of Internal Affairs of the city Anton Brulee, went to meet with an acquaintance, who by telephone, invited him to “sort out” with a group of people in a city cafe where they celebrated the wedding. Arriving at the cafe, Brulev opened fire on the taxi rank next to the cafe. A policeman shot one man and wounded six people, after which he shot several times at his friend’s car for imitating an attack. The Makarov pistol, from which the shots were fired, policeman stored illegally. During the investigation, Brulev fully admitted his guilt.

Bryansk, 2015, an officer of the counterterrorism department.

In April 2015, Vitaly Shpuntov, a senior officer of the counter-terrorism department of the Ministry of Internal Affairs of Russia for the Bryansk region, organized a criminal gang and went with two accomplices to home to one successful entrepreneur in the city. For orientation, the home of the entrepreneur was previously marked by the Nazi swastika. In the house, the attackers under the leadership of Shpuntov strangled the owner with a plastic bag and scotch. Then they seized a large sum in rubles and foreign currency.

By the verdict of the Bryansk Regional Court, Vitaly Shpuntov in November 2017 was sentenced to 19 years imprisonment with serving time in a penal colony.

Lyubertsy, Moscow region, 2015, a commander of a platoon guard and convoy.

The commander of a separate platoon guard and escorting the Western District of Moscow, 40-year-old Mikhail Dronik, who lived in the town of Lyubertsy, Moscow Region, served as a paratrooper before entering the police. In May 2015, a policeman killed his neighbor in a communal apartment inflicting him several blows of a kitchen knife, and then, in order to get rid of witnesses, took the life of his wife and young son in the same way. The body of his victims, the killer dismembered and tried to destroy the remains with a meat grinder and sulfuric acid.

In the course of the investigation of the murder, were carried out several forensic and psychological examinations. They all recognized Dronik as sane and mentally healthy. He fully understood his actions. The jury of the Moscow Regional Court issued a verdict on the guilt of the ex-policeman, but four jurors found him worthy of condescension. As a result, the court sentenced Mikhail Dronik to 18 years in prison.

On the night of April 6-7, 2017, the head of the drug trafficking control department of the Ministry of Internal Affairs of Russia «Mtsenskiy», police colonel Vladimir Sviridov, fell out with his 44-year-old cohabitant. During an argument, a police officer brutally beat his girlfriend and the woman died on the spot from the beatings. As it turned out, Sviridov had beaten his wife before. In 2015 was opened a criminal case for beating, but it was terminated “due to the expiration of the statute of limitations”.

The court sentenced the former police officer to 11 years in prison with a term of imprisonment in a penal colony.

Snezhnogorsk, Murmansk region, 2013, a head of the City Department of the Interior.

On December 12, 2013, the head of the Snezhnogorsk city department of internal affairs Sergei Yudenko talked with his acquaintance, who was previously convicted twice, in his car. According to the investigation, during the conversation between them arose a quarrel. Taking advantage of the fact that his interlocutor turned away, the policeman shot him with a service pistol. From the scene, Yudenko hid in his own car and tried to destroy evidence.

In August 2015, the Inspector for Minors Affairs of the Ministry of Internal Affairs of the Ministry of Internal Affairs «Goryachy Klyuch » Ivan Sorokoumov put a 12-year-old girl into his car, took him to outside the city and raped him. Then, fearing publicity on her part, the policeman killed the girl, hitting the back of the head with a baseball bat. The killer threw the corpse into the river. During the investigation, it turned out that Sorokoumov had sexual relations with other minors.

In May 2017, the Krasnodar Regional Court sentenced Ivan Sorokoumov to 23 years in prison with a term of imprisonment in a strict regime colony.

An employee of the Stary Oskol traffic police, Mikhail Saplinov, raped and killed two female students, one in 2014, the other in 2016. The bodies of the girls were not found, but at the disposal of the investigation were video materials with scenes of abuse and sexual acts with his victims. The testimony of several witnesses confirmed the guilt of Saplinov to the crimes imputed to him. The case received a wide public response.

The jury of the Belgorod Regional Court in February 2018 found the ex-policeman guilty of murder and rape. They stated that he does not deserve leniency and sentenced Mikhail Saplinov to life imprisonment.

Rostov-na-Donu, 2017, a deputy head of the weapons department of the Main Internal Affairs Directorate.

In July 2017, Sergey Kadatskiy, at that time he was a police major and deputy head of the armaments department of the Main Directorate of Internal Affairs, shoot a car from a hunting carbine with an optical sight. In this car were his ex-wife and her father. The tragedy occurred on the Rostov-Taganrog highway. The policeman escaped from the scene of the crime. The woman died on the spot, her father was seriously wounded, but managed to tell the drivers who had come to help him the name of the gunman, which contributed to his rapid detection.

The court of the Myasnikovsky district of the Rostov region in July 2018 sentenced Sergei Kadetskiy to 15 years’ imprisonment, serving time in a penal colony.